Although the exact cause of hemorrhoids is unknown, pressure in the abdomen may cause the veins to swell and become irritated. This pressure may be caused by pregnancy, standing for long periods, straining during bowel movements, coughing or vomiting.

Other contributing factors may include:

Over time, the pressure causes the tissues supporting the vessels to stretch. If the stretching and pressure continue, the weakened vessels protrude.

Symptoms of hemorrhoids may include:

Hemorrhoids can often be effectively treated at home. Mild symptoms may be relieved by increasing the amount of fiber and fluids in the diet. Eliminate excessive straining in order to reduce pressure on hemorrhoids and prevent them from protruding. Sitting in plain warm water for about 10 minutes may also provide some relief.

Adopting these measures can often reduce hemorrhoid pain and swelling within two to seven days. Firm lumps may take four to six weeks to recede. If home treatment is not effective, or if you have persistent pain from a thrombosed hemorrhoid, your doctor may recommend a procedure to remove the hemorrhoid that contains the blood clot. This procedure can be performed on an outpatient basis under local anesthesia.

Severe hemorrhoids may require one of the following procedures, some of which can be performed on an outpatient basis.

Ligation (rubber band treatment) is typically effective on internal hemorrhoids that produce during bowel movements. Your doctor will place a small rubber band over the hemorrhoid in order to cut off its blood supply. After a few days, the hemorrhoid falls off, and the wound typically heals in one to two weeks. Ligation may cause mild discomfort and bleeding and may need to be repeated to achieve optimal results.  This procedure is typically done in the doctor’s office, as no anesthesia is required.

The Nexus Ligator System is the most patient-friendly option of this type and is now offered at The Jackson Clinic by Dr. Ami Naik in gastroenterology.

Injection and coagulation are often effective on bleeding internal hemorrhoids that do not protrude. These methods, which cause the hemorrhoid to shrivel up, are relatively painless.

Do hemorrhoids lead to cancer?

There is no relationship between hemorrhoids and cancer. However, the symptoms associated with hemorrhoids, especially bleeding, are similar to many other diseases of the digestive system, including colorectal cancer. If you have any symptoms that you think may be indicative of hemorrhoids, it is important to have your symptoms evaluated by a doctor who specializes in conditions of the colon and rectum. Everyone over 50 years of age should undergo screening for colorectal cancer. Do not attempt any home hemorrhoid treatments without first being properly diagnosed by a doctor. 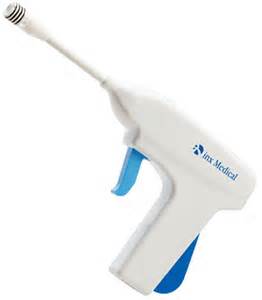 How does the Nexus Ligator Work?

A doctor first examines the rectum with one of his or her fingers and then inserts a small device called an anoscope into the rectum. This allows the doctor to see the internal hemorrhoids and determine if they should be treated. Next, the Nexus Ligator System will be inserted through the anoscope. In a matter of seconds, the doctor squeezes the handle on the instrument and applies a tiny, latex-free rubber band on to one of the hemorrhoids. Typically, patients experience very minimal, if any, discomfort during the procedure.

The rubber band disrupts the blood supply to the hemorrhoid, and within a few days, the hemorrhoid will shrivel up and then pass, usually unnoticed, with a normal bowel movement. That’s it! The entire procedure takes less than 10 minutes. Who knew that getting rid of your hemorrhoids could be so easy?

Why should I visit my Jackson Clinic doctor who uses the Nexus Ligator System?

Watch the 3D Animation of the Nexus Ligator  >>

For an appointment with Dr. Ami Naik, your local Nexus Ligator certified physician, call 731-422-0213 or click here to make an appointment.